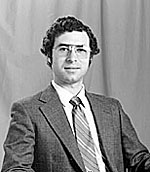 
"For significant contributions to enhancing efficient energy use, particularly for applying physics and economics to optimize energy-efficient appliance standards."


Dr. Goldstein received a B.A. in Physics in 1973 from the University of California at Berkeley, and a Ph.D. in Physics from the same institution in 1978. He has worked on energy efficiency and energy policy since the early 1970s and currently co-directs the Energy Program at the Natural Resources Defense Council.

Dr. Goldstein has worked with state, regional, and national governments, as well as professional organizations, to develop and implement energy efficiency standards for new buildings and appliances. He negotiated the agreements that led to the National Appliance Energy Conservation Act of 1987, and the Amendments of 1988, and has helped design and direct energy efficiency programs for buildings and appliances with utilities and state regulatory agencies. He was a founding director of the Consortium for Energy Efficiency, and is also on the boards of four other market transformation organizations.

Dr. Goldstein initiated and directed research on the dependence of automobile ownership and use on neighborhood infrastructure, and developed the Location Efficient Mortgage.