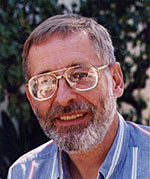 
"For applying physics to issues of nuclear weapons proliferation, arms control, more efficient usage of our energy resources, and other matters of public policy; and for effective communication on such issues to the physics community, policy makers and the general public."


David Hafemeister received his B.S. degree from Northwestern University in 1957 and his Ph. D from the University of Illinois in 1964. He is currently a Professor of Physics at California Polytechnic State University.

He was the lead on technical matters for the ratification of the START, CFE, and TTBT arms control treaties while serving as a professional staff member of the Senate Committees on Foreign Relations and Governmental Affairs (1990 - 1993). Other arms control tasks were as the Science Advisor to Senator John Glenn (1975-77), Special Assistant to the Deputy Under Secretary of State Nye (1977 - 78), the State Department Offices of Nuclear Proliferation Policy (1979) and Strategic Nuclear Policy (1987), and at various universities.