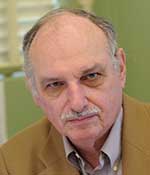 
"For leadership in the BABAR and Belle experiments, which established the violation of CP symmetry in B meson decay, and furthered our understanding of quark mixing and quantum chromodynamics."


David Hitlin received his B.A. in 1963, M.A. in 1965, and his Ph.D. in 1968 all from Columbia University. He was an Instructor at Columbia from 1967 through 1969. In 1969, he moved to SLAC as a Research Associate in the Schwartz/Wojcicki group, studying decays and interactions. He became an Assistant Professor in the Stanford Physics Department in 1972 and an Assistant Professor at SLAC in 1975, joining the Richter group to build the Mark II detector at SPEAR. He was appointed Associate Professor at Caltech in 1979, and Professor of Physics in 1986, continuing his work in e+e- annihilation with the Mark III at SPEAR, SLD at SLC and BES at BEPC. In 1987, he began focusing on methods of measuring CP-violating asymmetries in neutral B meson decay. These efforts came to fruition with the approval of the PEP-II Asymmetric B Factory and the accompanying BABAR detector at SLAC. He served as Spokesman of the BABAR Collaboration for the first six years. He is currently a member of the Mu2e Collaboration at Fermilab, searching for charged lepton flavor violation through the rare non-Standard Model process of muon-to-electron conversion in the field of an aluminum nucleus. Hitlin is a Fellow of the APS.