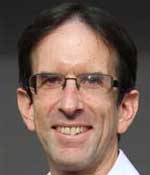 
"For pathbreaking contributions to the calculation of perturbative scattering amplitudes, which led to a deeper understanding of quantum field theory and to powerful new tools for computing QCD processes."


David A. Kosower is a particle theorist whose main interests are in scattering amplitudes in gauge theories.

He received an AB in Physics from Harvard College in 1982, and stayed on at Harvard for his graduate work, receiving his PhD in 1986. He was a post-doctoral fellow at Columbia University (1986-88), at the Fermi National Accelerator Laboratory (1988-91), and at CERN (1992-93), before joining the staff of the now-Institut de Physique Théorique at the French Atomic Energy Commission's Saclay research center in 1993. He has been a visiting professor at the University of Zurich and at the Weizmann Institute, and a participant in extended workshops at the Kavli ITP in Santa Barbara and the Galileo Galilei Institute in Florence, Italy. He was one of the first recipients of an Advanced Grant from the European Research Council.

His current research focuses on precision calculations in quantum chromodynamics. He is interested both in continually improving techniques for these calculations, and in applying them to phenomenology at CERN's Large Hadron Collider.