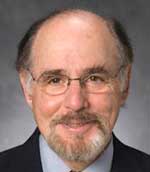 
"For his work in computational physics recognized internationally, and his creation and leadership of the Center for Simulational Physics that has had great success in educating young scientists from many countries in computer simulations.
"


David P. Landau received a B.A. in physics from Princeton University in 1963 and a Ph.D. in physics from Yale University in 1967. After a postdoctoral year in Grenoble and a year as a Lecturer at Yale University, he moved to the University of Georgia where he is currently Distinguished Research Professor of Physics and founding Director of the Center for Simulational Physics. His research involving computer simulations (primarily Monte Carlo) has been featured in publications from Physical Review Letters to the New York Times. The Wang-Landau sampling method is now state-of-the-art in statistical physics and related fields. He was awarded the Jesse Beams medal for outstanding research by SESAPS and the Aneesur Rahman Prize for Computational Physics by the APS. As tangible recognition of his outreach efforts he has been named an Adjunct Professor at Helsinki University of Technology in Finland and the Senior Guangbiao Distinguished Professor at Zhejiang University in China. He is a Fellow of the APS and has been named an Alexander von Humboldt Fellow, an Alexander von Humboldt Senior U.S. Scientist, a Fellow of the Japan Society for the Promotion of Science and a Fellow, Institute of Physics (London).