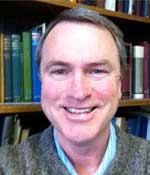 
"For seminal contributions to the development and application of quantum metrological methods, in particular of squeezed light sources and optical springs, enabling sensitive measurements beyond the standard quantum limit."


Professor McClelland received a Bachelor of Science with Honours in 1977 and a Master of Science in 1982 from the University of Western Australia, and a Doctor of Philosophy in 1987 from the University of Otago. He is currently Professor of Physics, Head of the Department of Quantum Science and Director of the ANU Centre for Gravitational Physics at The Australian National University.  He has worked in the field of gravitational wave detection for 20 years with an emphasis on quantum noise limited instrumentation, optical squeezing and opto-mechanics on the gram scale and above. He is principal investigator for Australia's partnership in the Advanced LIGO gravitational wave detection project. He actively pursues the application of techniques developed for this purpose to areas such as optical sensing for exploration and  security and earth observation from space. He is a Fellow of the American Physical Society, the Astronomical Society of Australia and the Australian Institute of Physics.