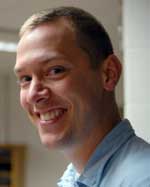 
David Moehring was raised in Richmond, Indiana and attended Purdue University as an undergraduate student where he was a NCAA scholarship golfer. While an undergraduate, he participated in two Research Experience for Undergraduate programs at the Indiana University Cyclotron Facility and the NASA Langley Research Center. David received his Bachelors degree in Honors Applied Physics with highest distinction in 2001, and shortly thereafter joined the trapped ion quantum computing group of Chris Monroe at the University of Michigan. Davids graduate dissertation presents a theoretical and experimental realization for the entanglement of two trapped atomic ions, including the first explicit demonstration of quantum entanglement between a single trapped ion and its single emitted photon, as well as the entanglement between two macroscopically separated trapped ions. In addition to their promise for scalable quantum information processing, these results provide evidence for the completeness of quantum mechanics via demonstration of Bell inequality violations. In addition to the 2008 DAMOP Thesis Prize, David was awarded the Kent M. Terwilliger Memorial Thesis Prize and the Rackham Distinguished Dissertation Award. Since August 2007, David is an Alexander von Humboldt Research Fellow in the Quantum Dynamics group of Prof. Gerhard Rempe at the Max Planck Institute for Quantum Optics in Garching, Germany.