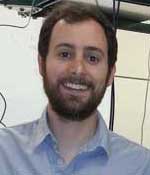 
"A search for low-mass dark matter with the Cryogenic Dark Matter Search and the development of highly-multiplexed phonon-mediated particle detectors."


David Moore received a bachelor of science in physics and mathematics from Yale University in 2006. His doctoral research was performed at the California Institute of Technology, where he worked on the Cryogenic Dark Matter Search (CDMS) under the supervision of Prof. Sunil Golwala, completing his Ph.D. in physics in 2012. His thesis work focused on a search for interactions from low-mass dark matter particles in the CDMS detectors and significantly constrained possible dark matter signals reported by the DAMA/LIBRA, CoGeNT, and CRESST experiments. In addition, he developed novel sensors for highly pixelized phonon-mediated particle detectors and provided the first demonstration of position and energy resolved particle detection with this technology. He was the recipient of the John Stager Stemple Memorial Prize in Physics (Caltech, 2009) and the Howard L. Shultz Prize in Physics (Yale, 2006). He is currently a postdoctoral researcher at Stanford University, where he is working to detect neutrinoless double beta decay as part of the EXO collaboration.