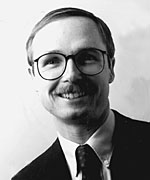 
"In recognition of their spectroscopic investigations that have elucidated the structure and eigenstate resolved dynamics of weakly bound complexes. They have each pioneered a novel method of high resolution Infrared Spectroscopy and have used their respective methods in a series of insightful investigations of a wide range of chemically important complexes."


Dr. Nesbitt completed his undergraduate studies in physics and chemistry at Harvard University in 1975. After two years of teaching at a secondary school, he entered his Ph.D program at the University of Colorado, receiving his degree in 1981.

Dr. Nesbitt is presently Professor Adjoint at the Joint Institute for Laboratory Astrophysics, the National Institute of Standards and Technology, and the Department of Chemistry and Biochemistry at the University of Colorado. His experimental research at JILA has involved application of direct absorption IR laser techniques to study flash kinetic spectroscopy of transient radicals, unimolecular energy flow in vibrationally excited states, state-to-state collisional energy transfer dynamics in crossed beams, and spectroscopy of weakly bound van der Waals and hydrogen bonded complexes in silt supersonic jet expansions.

Dr. Nesbitt has received the Nobel Laureate Signature Award by the American Chemical Society, the Camille and Henry Dreyfus Award for Newly Appointed Faculty, the Alfred P. Sloan Fellowship, the APS Wilson Prize, the Arthur S. Flemming Award, the Department of Commerce Silver Medal, the Edward Uhler Condon Award and is a fellow of the American Physical Society.