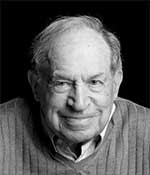 
"For his contributions to our understanding of emergent behavior in quantum matter-plasmons, nuclear, celestial and unconventional superfluidity, heavy electron emergence-and for his effectiveness in communicating these discoveries and a new “emergent” paradigm to the broader scientific community."


David Pines received his A.B at University of California, Berkeley in 1944 and his Ph.D. at Princeton University in 1950. He is Co-Founder in Residence at the Santa Fe Institute, distinguished Research Professor of Physics at UC Davis, and Research Professor of Physics/Professor Emeritus of Physics and of Electrical and Computer Engineering in the Center for Advanced Study at University of Illinois, Urbana-Champaign. His current research focuses on the search for the organizing principles responsible for emergent behavior in quantum matter, with particular attention to unconventional superconductivity and the emergence of heavy electrons in Kondo lattice materials. He received an honorary degree in 2009 from the University of St. Andrews, the 2009 John Bardeen Prize for Superconductivity Theory, two Guggenheim Fellowships, the Feenberg Medal, Friemann, Dirac, and Drucker Prizes, and by his election to the National Academy of Sciences, American Philosophical Society, American Academy of Arts and Sciences, Russian Academy of Sciences, Hungarian Academy of Sciences, and the Science Academy [Istanbul].  He also received the 2013 Jackson Excellence in Graduate Education Award from the AAPT.