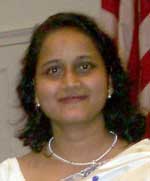 
Deepshikha Choudhury (Shukla) received a B.Sc (Hons.) from Cotton College, Guwahati, India in 1995 and a M.Sc. (Physics) from Indian Institute of Technology, Delhi, India in 1997. Thereafter, she joined Ohio University, Athens, OH in 2001 for a doctoral degree in Physics, which she completed in 2006. At Ohio University, under the guidance of Prof. Daniel R. Phillips, she focused on using Compton scattering on light nuclei (A &#61603; 3) in order to devise roadmaps that would enable the experimental extraction of neutron electromagnetic polarizabilities. As a graduate student she won the 2004 Ohio University Student Enhancement Award that provides individual research grants to graduate students.

She joined the Department of Physics at the George Washington University at Washington, DC as a post-doctoral researcher in Nov. 2006. Here, together with Prof. Harald W. Griesshammer, she is currently working on Effective Field Theory techniques in the study of various physical processes involving few-nucleon systems.