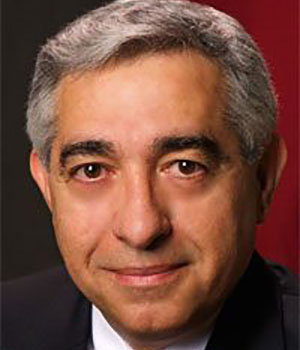 
"For pioneering several areas in laser sciences, among them, the fields of parity-time non-Hermitian optics, accelerating Airy waves, and discrete solitons in periodic media."


Demetri Christodoulides is an Endowed Chair Professor in the Department of Electrical and Computer Engineering at the University of Southern California. He received his Ph.D. from Johns Hopkins University in 1986. After earning his doctorate degree, he joined Bellcore as a postdoctoral research fellow, and was a faculty member in the Department of Electrical Engineering at Lehigh University from 1988 to 2002. Between 2002 and 2022 he was a Pegasus Professor and the Cobb Family Endowed Chair at CREOL–The College of Optics and Photonics at the University of Central Florida. Christodoulides’ contributions have been in the general field of optics and photonics. Among them is the first prediction of discrete self-trapped states in optical lattices, Bragg solitons in nonlinear gratings, vector solitons, and the development of the theory describing nonlinear optical interactions in soft matter and biological colloidal systems. His group proposed and demonstrated optical accelerating beams, which today find applications in microscopy and nonlinear optics. In the last ten years or so, his work has focused on the ramifications and applications of some special symmetries in optics, such as those of parity-time symmetry and supersymmetry. Most recently he has been exploring new theoretical avenues in describing the complex dynamics of highly multimode nonlinear photonic systems by means of optical thermodynamics. He has served as an associate editor for the IEEE Journal of Quantum Electronics and JOSA B. He is a Fellow of APS and Optica. He is the recipient of the Optica’s 2011 R.W. Wood Prize and 2018 Max Born Award.