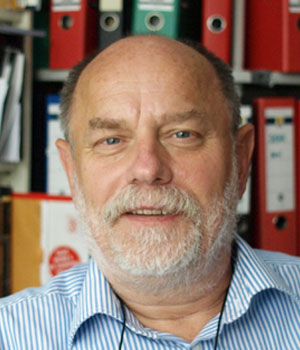 Dieter Hoffmann
Max Planck Institute for the History of Science


"For insightful, determined, often courageous biographical and institutional studies of the history of German physics and technology, from Weimar through the Nazi and East German regimes."


Dieter Hoffmann was born in Berlin in 1948 and has studied physics at the Humboldt University in Berlin from 1967 to 1972, finishing with the Diplom in physics. At the Humboldt-University he also earned his Ph.D. in 1976 and a Habilitation (similar to a second Ph.D.) in 1989 with studies in history of science. Between 1975 and 1990, he was a research fellow at the Department of the History of Science (headed by Hubert Laitko) in the Institute of Theory, History and Organization of Science of the Academy of Sciences of the GDR (East Germany). After the reunification of Germany he became a researcher at the National Metrology Institute of Germany (Physikalisch-Technische Bundesanstalt, PTB) and the recipient of a grant from the Humboldt Foundation. In 1995 he became a Senior Fellow at the Max Planck Institute for the History of Science in Berlin (retired since 2014), and he has also taught as an Adjunct Professor at Humboldt University in Berlin. In 2001, he became a member of the International Academy of the History of Science and in 2010 of the Leopoldina, the German National Academy of Sciences; in 2010 he was also awarded the Honorary Pin of the German Physical Society for his achievements in the history of physics His research is focused on the history of physical sciences in the 19th and 20th centuries, in particular through biographical studies and institutional histories, and on Berlin as a hub of science. Another focus of his work has been scientific research in totalitarian regimes, especially the Third Reich; since 1989, he has been also investigating the development of science and technology in the GDR (East Germany). To date, Hoffmann is the author/co-author or editor/co-editor of about 60 books and 350 papers.