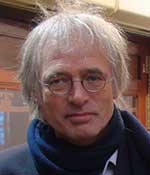 
"For insightful experiments and analyses on a wide variety of quantum solids with strong electronic correlations in general, and cuprate superconductors in particular, using optical spectroscopy."


Prof. Dirk van der Marel obtained his B.S. in phyics in 1982 and his Ph.D. in mathematics and natural sciences from the University of Groningen (the Netherlands) in 1985. He was a research fellow at Philips Research Laboratories in Eindhoven, then joined Delft University of Technology (the Netherlands) as Universitair Docent, later Universitair Hoofd Docent. During 1990, he was a visiting research fellow at the Max Planck Institut für Festkörperforschung in Stuttgart, returned to Delft University of Technology, and in 1992 became full professor at the University of Groningen. In 2003 he moved to the University of Geneva, where he has been active since then as a full professor in the Department of Quantum Matter Physics (DQMP). He is best known for his optical experiments on high temperature superconductors revealing the changes of kinetic energy through the superconducting phase transition, and his work on the Josephson plasmons in multilayered superconductors. He is a member of APS, NNV, SPS, EPS, and counsellor of the Swiss National Science Foundation.