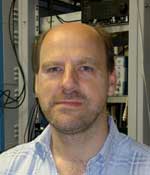 
Dirk van der Werf gained his first degree at the University of Groningen, the Netherlands in 1989. His received his PhD in 1995 also in Groningen on “Helium in Tungsten: A Calculational Approach”. After a three year postdoc at the Royal Holloway College, University of London working on positron beams and postronium formation on carbon surfaces, he became involved with antihydrogen research with the ATHENA collaboration in 1998, first at University College London and subsequently at Swansea University where he gained in 2005 five year RCUK fellowship. He is presently a Senior Lecturer at Swansea University. He is a founding member of the ALPHA collaboration. He built the positron accumulator, instigated research on non-neutral plasma stability in multipolar fields and designed the neutral magnetic traps in collaboration with BNL and LBNL.