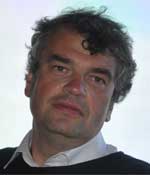 
"For innovative and insightful use of infrared spectroscopy to probe correlated electron systems."


Dmitri N. Basov received the M.S. degree (1988) from Moscow Engineering Physics Institute and the Ph.D. (1991) from Lebedev Physics Institute, Academy of Sciences of Russia. He was a postdoctoral Research Associate at the University of Regensburg (1991) and McMaster University (1992-1996). In 1996, he held an Assistant Physicist appointment at Brookhaven National Laboratory. He joined the faculty of the University of California, San Diego as an Assistant Professor in 1997 and was promoted to Professor in 2001. At present, he serves as the Chair of the Physics Department. Throughout his career, Basov has developed and used various infrared techniques to investigate novel electronic and magnetic phenomena in a wide variety of materials including high-Tc superconductors, transition metal oxides, ferromagnetic semiconductors, organic materials, and - most recently - graphene. A leitmotif of his research is to explore optical phenomena originating from many body effects and electronic correlations. Basov is a Fellow of the American Physical Society (2005). He was awarded the Ludwig Genzel prize in 2004 and the Humboldt Research Prize in 2009.