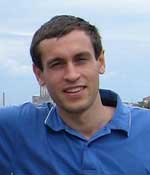 
Dmitry Fedosov was born and grew up in Western Siberia, Russia. He received his Bachelors degree in mathematics from Novosibirsk State University, Novosibirsk, Russia in 2002. After earning a MS degree in aerospace engineering from the Pennsylvania State University in 2004, he moved to Brown University, where he pursued a PhD degree in applied mathematics under the supervision of George Karniadakis. Dmitry received a MS degree in applied mathematics in 2007 and his PhD in 2010. His thesis work was on multiscale modeling of blood flow and soft matter with the focus on modeling polymers and blood cells. He generalized and improved a red blood cell model deriving an accurate cell model, which is able to capture the essential physical properties of red blood cells and can be applied for quantitative predictions of blood flow in health and disease. He applied this model to quantify biophysical properties of red blood cells in blood flow in malaria. Dmitry also developed a multiscale hybrid algorithm, called triple-decker that allows flow modeling over a wide range of spatiotemporal scales. His thesis work was recognized with the David Gottlieb Memorial Award for excellence in graduate study by the Brown Universitys Division of Applied Mathematics.

After completing his PhD, Dmitry moved to Forschungszentrum Juelich, Germany for a postdoctoral position in the theoretical soft matter and biophysics group led by Gerhard Gompper. He was awarded a postdoctoral fellowship from the Humboldt foundation in Germany and he continues to do research in computational biophysics with the main focus on blood cells and cell suspensions in flow.