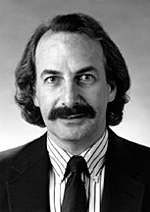 
"For his seminal contribution to nanotechnology and for pioneering a new methodology for probing matter at the atomic scale."


Don Eigler is an IBM Fellow at the IBM Almaden Research Center. He received a B.A. in Physics from the University of California San Diego in 1975. He was a predoc at the University of Cologne in 1975-76, after which he returned to the University of California San Diego where he received a Ph.D. in Physics in 1984. He was a Postdoctoral Member of the Technical Staff at AT&T Bell Laboratories in 1984-86. He joined IBM as a Research Staff Member in Physical Sciences in 1986 and was appointed an IBM Fellow in 1993. In 1994 he was the recipient of the Gordon Research Conferences first Alexander M. Cruickshank Lectureship in physical sciences. He was a co-winner of the '93-'94 Newcomb Cleveland Prize given by The American Association For The Advancement Of Science. He was awarded the 1995 Dannie-Heineman Prize by the Goetingen Academy of Sciences for his work on the quantum mechanical behavior of atomic scale devices. He was named the 1998 Alumnus of the Year by the University of California San Diego Alumni Association. He was the winner of the 1999 Nanoscience prize. He is a fellow of the American Physical Society and the American Association for the Advancement of Science. His area of research is experimental condensed matter physics, specializing in the physics of surfaces at low temperatures and the physics of nano-scale structures.