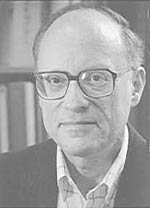 
"For using phase-sensitive experiments in the elucidation of the orbital symmetry of the pairing function in high-Tc superconductors."

Dr. Ginsberg is a member of Phi Beta Kappa and Sigma Xi, was a National Science Foundation Pre-doctoral Fellow and Senior Postdoctoral Fellow, an Alfred P. Sloan Research Fellow and is a Fellow of the APS. He received the University of Illinois Engineering College's Daniel C. Drucker - Tau Beta Pi Eminent Faculty Award in 1992 and a University Scholar Award in 1994.