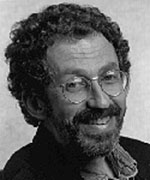 
"For his seminal work on lattice quantum chromodynamics including algorithmic innovations, massively parallel computer software development and hardware implementation that led to calculations of hadron masses and the mass and decay couplings of the scalar glueball."