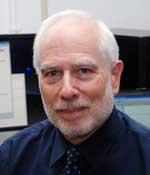 
Douglas A. Bryman has been the J. B. Warren Chair Professor in the Department of Physics and Astronomy at the University of British Columbia since 1999. He received a B.Sc. from Syracuse University (1966) and a Ph. D. from Virginia Polytechnic Institute and State University (1972).  He was a Research Fellow and Senior Research Scientist at TRIUMF from 1972-1999, and Program Director for Medium Energy Physics at the National Science Foundation (1978-79). Dr. Bryman's research has focused on flavor physics through the study of rare decays of muons, pions, and kaons and he has been a spokesman for several related experiments at TRIUMF and Brookhaven National Laboratory. He has also been involved in detector instrumentation development for high energy physics and applied physics, for which he has received several patents.  His current research involves measurements of rare pion decays, positron emission tomography, and cosmic ray muon geo-tomography. Bryman is a Fellow of the American Physical Society and was a Fellow of the Japanese Society for the Promotion of Science in 2009. He has served as Divisional Associate Editor at Physical Review Letters (2004-10), and on numerous laboratory and agency advisory boards including BNL, Fermilab, the Paul Sherrer Institut, NSERC, and the Nuclear Science Advisory Committee.