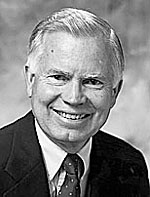 
"For his ground-breaking work on computational approaches to the study of quantum many-body problems, particularly those involving strongly correlated electron systems, and his exceptional ability to convey the excitement of physics to diverse audiences."


Dr. Scalapino received his B.S. degree from Yale University in 1955 and his Ph.D. from Stanford in 1961. After working as a postdoctoral fellow at the University of Pennsylvania, he joined the faculty there and became Professor of Physics in 1968. In 1969, he moved to the University of California, Santa Barbara. In 1979, along with his colleagues, he drafted the proposal that led the National Science Foundation to establish the Institute of Theoretical Physics at UCSB.

Dr. Scalapino's research has focused on strongly correlated electron materials and the use of numerical methods to determine their physical properties. His main interest recently has been to understand the properties of the high Tc cuperate superconductors and their paring mechanism.