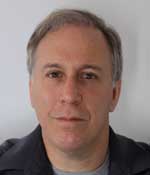 
"For pioneering contributions to the theory of quasicrystals, including the prediction of their diffraction pattern."


Dov Levine is Professor in the Department of Physics at the Technion  Israel Institute of Technology.  He received his B.S. in Physics from S.U.N.Y. Stonybrook in 1979, and his Ph.D. in Physics from the University of Pennsylvania in 1986.  He was a postdoctoral member of the Institute for Theoretical Physics, University of California Santa Barbara (now KITP) from 1986 to 1988, when he became a faculty member at the University of Florida.  In 1990 he joined the Physics Department of the Technion.  In addition to his work on quasicrystals, Dr. Levines research has mainly been concentrated in soft condensed matter physics, particularly granular materials, emulsions, and foams, and more recently on systems far from equilibrium and on the quantification of unconventional order in solids.

Dr. Levine is a past recipient of an NSF Presidential Young Investigator Award, an Allon Fellowship, and the Minoru and Ethel Tsutsui Distinguished Graduate Research Award from the New York Academy of Sciences.