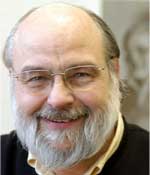 
Duncan Steel received his undergraduate degree in physics from the UNC-Chapel Hill in 1972 and his Ph.D. with David Bach and James Duderstandt from the U. Mi. in 1976. Prior to joining the faculty at Michigan in 1985, he was a Senior Staff Physicist at the Hughes Research Laboratory in Malibu. At Michigan, he is the Robert J. Hiller Professor and Professor of EECS, Physics and Biophysics. It was at HRL, while working with Paul Berman and Juan Lamb to understand coherent nonlinear optical interactions in atoms and molecules, that he began to understand the power of probing the nonlinear optical response to study the quantum behavior in these systems. When he started research at Michigan, he initiated experiments in solids, eventually focusing on understanding the nonlinear optical response of the exciton in GaAs with considerable help from Prof. Roberto Merlin. Hailin Wang in his group showed that the leading term in the nonlinear optical response was due to physics similar to collisional interactions that lead to dephasing. Other students including Steve Cundiff went on to use time domain techniques to understand other physics in these systems. Working with Phil Bucksbaum, he learned how to apply the concepts of coherenct control to these systems. Currently, he has been collaborating with Dan Gammon at NRL and Lu Sham at UCSD as well as Luming Duan and Paul Berman to understand the nature of optical interactions in quantum dots and to develop them for applications to quantum computing.