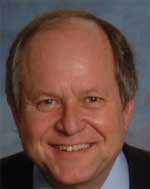 
"For his unique activities in conveying to the general public the excitement and value of physics predominantly through the development and continued leadership of the program The Physics Force."