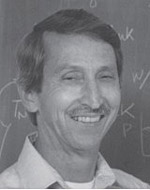 
"For the pioneering development of the capacitive pressure transducer, its application to the ³He melting pressure thermometry, and other scientific uses."


E. Dwight Adams received his BA degree from Berry College in 1953 and his MS degree from Emory University in 1954. Then, after two years in the US Army, he attended Duke University, receiving his Ph.D. in 1960. This was followed by two years as a postdoctoral associate at Stanford University where he worked with one of his mentors, W. M. Fairbank. There he invented the persistent switch for superconducting magnets, a device that is crucial to this technology.

He arrived at the University of Florida as assistant professor in 1962 where he initiated the ultra-low temperature program, conducting research on quantum fluids and solids. With his first graduate student, Gerald Straty, he invented the capacitive Straty-Adams gauge for in situ high-resolution low temperature pressure measurement. This gauge is now in common use in low temperature labs around the world and has received the ultimate recognition of being used without reference.

One of the first uses of the Straty-Adams gauge by Adams and another of his early graduate students, Richard Scribner, was to study the melting pressure of ³He. It occurred to Scribner and Adams that the quantity they were studying with the gauge, the ³He melting pressure, had much greater resolution than their thermometer because of the enormous sensitivity of the gauge. Thus, they suggested that the ³He melting pressure would be the logical standard to use in the difficult range down to 1 mK.

Adams has received several awards for his achievements, including Fellow of The American Physical Society, The Beams Medal for Outstanding Research from APS(SES), and Outstanding Florida Scientist Medal, Florida Academy of Sciences. He recently retired from the University of Florida where he had been on the faculty for 42 years and now bears the title of Emeritus Professor. He is regarded as one of the worlds foremost authorities on low-temperature physics, including his pioneering work on the magnet phases of solid ³He. He has authored more than 130 publications, 3 books, and over 100 conference presentations.