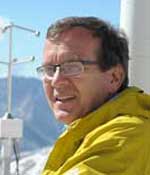 
"For seminal contributions to experimental techniques that enabled quantitative Lagrangian measurements which opened a new subfield of turbulence research."


Eberhard Bodenschatz received his Ph.D. in theoretical physics from University of Bayreuth in 1989. From 1989 to 1992 he was a postdoctoral associate in experimental physics at UC Santa Barbara. From 1992 until 2005 he was Professor of Physics at Cornell. In 2005 he became Director at the Max Planck Institute for Dynamics and Self-Organization. Since 2005 he is Adjunct Professor of Physics and the Sibley School of Mechanical and Aerospace Engineering at Cornell. In 2007 he was appointed to professor at the University of Göttingen. His scientific work is in the physics of complex systems with emphasis on fluid dynamics and biophysics. He is Alfred P. Sloan Research Fellow, Cottrell Scholar, Fellow of the American Physical Society, the Institute of Physics, and the European Mechanics Society. He is Editor in Chief of New J. Phys., on the editorial committee of Ann. Rev. Cond. Mat. Phys., an editorial board member of EPJ History, and on the advisory board of arXiv. He was the founding chair of the of the International Collaboration for Turbulence Research, was a Director of the Materials Research Society, the Chair of the advisory board of KITP, and currently is Chair of the Chemistry, Physics and Technology Section of the Max Planck Society and the coordinator of the European High Performance Infrastructure in Turbulence Research (EuHIT).