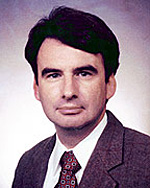 
Edward J. Doyle received his BE and MengSc degrees in Electrical Engineering from the National University of Ireland, University College Cork in 1980 and 1982. From 1980 to 1985 he was a research associate at the UKAEA Culham Laboratory, where he developed a far-forward scattering system for the TOSCA tokamak. In 1985 he joined the research staff at UCLA, where he is currently a senior researcher in the Electrical Engineering Dept. and Institute for Plasma Science and Technology. At UCLA he has pursued applications of advanced Far Infra-Red and mm-wave diagnostic systems to improve fundamental understanding of plasma turbulence and transport. In 1989 he joined the collaborative research team at the DIII-D National Fusion Facility, San Diego. A focus of his work on DIII-D has been the study of turbulence changes associated with the formation of edge and internal transport barriers, including ExB shear flow suppression effects. From 2000-2001 he led the Internal Transport Barrier Control Tool Development group at DIII-D, and he is currently the leader of the International Tokamak Physics Activity (ITPA) working group on Transport and Internal Transport Barrier Physics. He is a member of the American Physical Society.