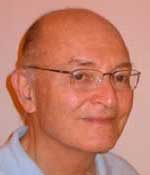 
"For pioneering contributions in nonlinear dynamics and chaos theory that have been uniquely influential for physicists and scientists in many field, and for communicating the beauty and unifying power of these concepts to remarkably diverse audiences."

Since coming to the University of Maryland, Dr. Ott’s research has concentrated on applications and basic theory of chaos and nonlinear dynamics emphasizing issues that are of interest to scientists seeking to apply chaos concepts to their research. Examples of his notable research contributions include development of understanding of transitions in chaotic dynamics; origination of methods for controlling chaos; chaotic scattering; fractals, transport and Lagrangian chaos in fluids; the role of chaos in the origin of cosmic magnetic fields; quantum chaos; and weather forecasting. Prof. Ott is a fellow of the American Physical Society, the Society for Industrial and Applied Mathematics, and the Institute of Electrical and Electronics Engineers. He is author of the textbook, Chaos in Dynamical Systems.