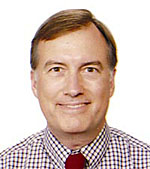 
"For the theoretical Discovery and Experimental Identification of Toroidicity Induced Alfven Eigenmodes."


Dr. Edward J. Strait received his B.A. from the University of Rochester in 1971, majoring in physics and mathematics. He earned his Ph.D. at the University of Wisconsin-Madison in 1979, with a thesis based in experimental work on the Wisconsin Levitated Octupole. Dr. Strait came to General Atomics in 1982, where he worked first on the Doublet III tokamak and then its successor, DIII-D. He developed DIII-Ds magnetic diagnostic system, which is used for feedback control of the discharge, equilibrium reconstruction, and stability analysis. His research has focused on the MHD stability of tokamak plasmas, including the stability limits of high beta plasmas, instabilities associated with transport barriers, and the stability of toroidicity-induced Alfven eigenmodes. He is currently working on wall stabilization of high beta plasmas and active control of resistive wall mode instabilities. Dr. Strait is manager of the DIII-D stability physics group, and is a fellow of the APS.