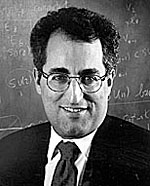 
"For their decisive advances in elucidating the dynamics of strongly coupled supersymmetric field and string theories. The deep physical and mathematical consequences of the electric-magnetic duality they exploited have broadened the scope of Mathematical Physics."


Dr. Witten received his BA at Brandeis University in 1971 and his Ph.D. from Princeton University in 1976. After four years at Harvard University as a postdoctoral fellow and Junior Fellow, he joined the faculty of Princeton University. He has been Professor of Physics at the Institute for Advanced Study since 1987. He is known for his work in elementary particle theory, especially quantum field theory and string theory, and their mathematical implications.

Dr. Witten's awards include the Alan T. Waterman Prize, the Fields Medal, and the Award in Physical and Mathematical Sciences of the New York Academy of Sciences, among others.