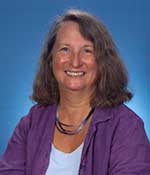 
"For seminal contributions to the understanding of reactive flows through computational simulations, especially the deflagration-to-detonation transition in gases and supernovae."

Dr. Elaine S. Oran received her AB degree from Bryn Mawr College in 1966 in both Chemistry and Physics, an M.Ph. from Yale in Physics in 1968, and a Ph.D. from Yale in Engineering and Applied Sciences in 1972. She has worked at the Naval Research Laboratory since 1972, first in the Plasma Physics Division, then in the Laboratory for Computational Physics. In 1988, she was make the NRL Senior Scientist for Reactive Flow Physics. Now she is also an adjunct professor at the University of Michigan, an adjoint professor at the University of Maryland, and a Visiting Professor at Leeds University.
She began her scientific career at the US Naval Research Laboratory in 1972 in the Plasma Physics Division, subsequently becoming one of the founding members of the Laboratory for Computational Physics in 1978, and the NRL Senior Scientist for Reactive Flow in 1988. Her research has dealt with the dynamics of fluids on nano to astrophysical scales. Her particular interests now are strongly reactive, compressible, usually turbulent flows that occur, for example, in high-speed engines and astrophysical scenarios.
She a Member of the NAE. Her awards include Honorary Fellow of AIAA,  and a Fellow of the APS, SIAM, ASME. She holds an Honorary Doctorate of Science from Leeds University and a Docteur Honoris Causafrom Ecole Centrale de Lyon. She received the Zeldovich Gold Medal of the Combustion Institute and the given the Dryden Research Lecture of the AIAA. She received the Achievement Award from the Society of Women Engineers and is in the Hall of Fame of Women in Technology International.