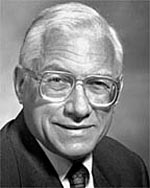 
"For lasting contributions and leadership to the understanding of transition to turbulence in high-speed flows and non-homogeneous flows."


Eli Reshotko is Professor of Engineering in the Department of Mechanical and Aerospace Engineering at Case Western Reserve University in Cleveland, Ohio. He received his BME degree from The Cooper Union in 1950, an MME from Cornell University in 1951 and a PhD in Aeronautics and Physics from Caltech in 1960. He joined the NACA-Lewis Flight Propusion Laboratory, now the NASA-Glenn Research Center in Cleveland, Ohio in 1951 and worked in compressible boundary layer theory, aerodynamic heating and boundary layer transition before taking leave to complete his PhD. Upon rejoining NASA, he served as Chief of the Plasma Physics Branch until he left in 1964 to take a faculty position at Case Institute of Technology. Over the last 35 years, he has done extensive work in stability theory, its role in transition and the control of transition, and has served since 1970 as the Chairman of the U.S. Boundary Layer Transition Study Group. He is currently active in studies of transient growth as it relates to "bypass" transition, the study of ice accretion on swept wings, and MEMS applications in aeronautics.

Eli Reshotko was elected to the National Academy of Engineering in 1984. He is a Fellow of AIAA, ASME, APS, AAAS and the American Academy of Mechanics. He is Chair of the Division of Fluid Dynamics of APS in 2000, having been Chair-Elect in 1999. He received the AIAA Fluid and Plasmadynamics Award in 1980 and was the AIAA Dryden Lecturer in 1994.