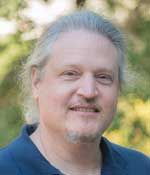 
Eli Rotenberg, Ph.D., is a senior staff scientist at the Advanced Light Source synchrotron, at the Lawrence Berkeley National Laboratory (LBNL) in Berkeley, California, where he serves as deputy of the Scientific Support Group. Dr. Rotenberg received his B.S. in applied and engineering physics from Cornell University (Ithaca, N.Y.) in 1987, and his Ph.D. in physics from the University of California, Berkeley in 1993. He is currently the director of LBNL’s Microscopic and Electronic Structure Observatory (MAESTRO), a synchrotron beamline facility dedicated to angle resolved photoemission spectroscopy (ARPES) measurements at the nanoscale. His research interests are the relationship between electronic structure and morphology, symmetry, and dimensionality, and the role of many-body interactions on the ground states of low dimensional materials such as graphene, metal and oxide surfaces. Dr. Rotenberg received the 2001 Peter Mark Award from the American Vacuum Society, the 2009 Kai Siegbahn Award, and the 2010 Vacuum Ultraviolet and X-ray Physics Prize. Dr. Rotenberg is a fellow of the American Physical Society.