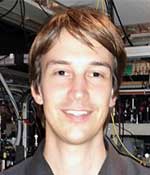 
Elmar Haller was born and raised in Hannover, Germany. During his schooldays he spent two years in Reading, UK, taking A-Levels, and he later returned back to Hannover to finish the German university-entrance degree, the Abitur. He pursued his undergraduate studies at the University of Heidelberg and received his diploma in physics in 2004 with distinction. The diploma thesis was written under the supervision of Prof. Joerg Schmiedmayer, with the focus on Bose-Einstein condensates close to metallic surfaces on atom-chips. In 2005 Elmar started his doctoral studies at the University of Innsbruck, Austria, where he joined the group of Prof. Hanns-Christoph Naegerl to set up an experiment to study the properties of quantum gases with tunable interactions in optical lattice potentials. His dissertation is largely about the behavior of strongly interacting bosons in one-dimensional geometry. During the course of his thesis, a new type of scattering resonances was observed, resonances that result from the mixing of the scattering potential and the external confinement. Elmar could show within his thesis that in the vicinity of such resonances a new metastable many-body state of attractive bosons in 1D called “super-Tonks-Girardeau gas” can be populated. In addition, he observed the “pinning” quantum phase transition from a strongly interacting Tonks-Girardeau gas to a Mott-insulator. In early 2012 Elmar will join the University of Strathclyde, Glasgow UK, as a postdoc in the group of Prof. Stefan Kuhr to study fermions in 2D geometry with single particle resolution.