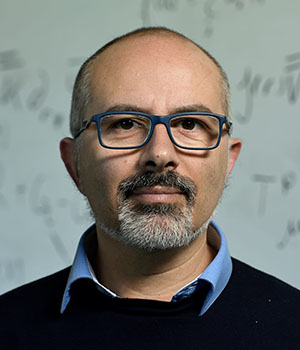 
Emanuele Berti is a professor at Johns Hopkins University, Maryland. He is a theorist whose research interests include black holes, neutron stars, gravitational-wave astronomy, and astrophysical tests of general relativity. Berti obtained his Ph.D. at the Sapienza University of Rome in 2002 with a thesis supervised by Valeria Ferrari. He was a postdoctoral fellow at the Aristotle University of Thessaloniki in Greece, the Institute of Astrophysics in Paris, Washington University in St. Louis, Missouri, and NASA’s Jet Propulsion Laboratory in California. In 2009 he joined the faculty at the University of Mississippi, where in 2017 he received the College of Liberal Arts inaugural Research, Scholarship, and Creative Achievement Award. He moved to Baltimore in 2018. Berti is a Fellow and current President of the International Society on General Relativity and Gravitation. He is also a Fellow of the American Physical Society (APS), a former Chair of its Division of Gravitational Physics, and a Divisional Associate Editor in Gravitational Physics for Physical Review Letters. He serves the gravitational-wave community as a member of the LISA Science Group, of NASA's U.S. LISA Study Team, and of the Cosmic Explorer Scientific Advisory Committee. He has coauthored over 200 refereed papers.