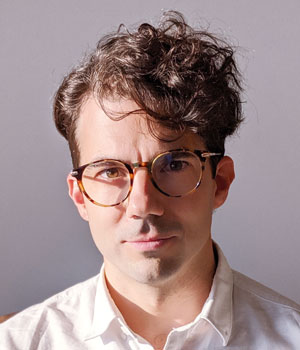 
"For the development of a comprehensive theory to describe the inherent states of amorphous solids, which is published in the article entitled “Edwards field theory for glasses and granular matter” in Physical Review E 98, 033001 (2018)."

Eric De Giuli obtained his BSc(Hons) from the University of Toronto in Mathematics and Physics in 2006. He completed a MSc in Geophysics in 2009 and a PhD in Applied Mathematics in 2013, both at the University of British Columbia. He went on to postdoctoral work at New York University, École Polytechnique Federale de Lausanne, and the Institut Philippe Meyer at École Normale Supérieure, Paris, before joining Ryerson University in Toronto, Canada as Assistant Professor of Complexity Physics in 2019. He has been a member of the American Physical Society since 2007. De Giuli's research concerns disordered systems with many degrees of freedom. One thread of his work is on the rheological and vibrational properties of amorphous matter near rigidity transitions. With Matthieu Wyart (EPFL), Edan Lerner (Amsterdam) and Gustavo Düring (Santiago, Chile) he worked on the mean-field theory of amorphous solids from the elementary-excitation perspective, showing the consistency of this approach with replica computations in infinite dimensions. Most recently, he has been working on a field-theoretic formulation that can go beyond mean-field. A second thread of work aims to use the tools of disordered systems and quantum field theory in topologically disordered complex systems; recently he proposed a statistical mechanical formulation of language syntax. His work has been profiled in APS Physics and Physicsworld.