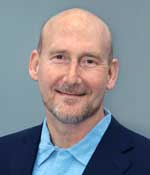 
Dr.  Eric Esarey received a B.S. in nuclear engineering from the University of Michigan in 1981 and a Ph.D. in plasma physics from the Massachusetts Institute of Technology in 1986.  He worked at the Naval Research Laboratory from 1986-1998 and has been a member of the Accelerator and Fusion Research Division of Lawrence Berkeley National Laboratory since 1998.  He is presently a senior scientist and deputy leader of the LOASIS Program at LBNL. As chief theoretician, Dr. Esarey is in charge of the theory and computational effort of the LOASIS Program, working closely with and providing support and guidance to the experimental effort.  He is also an adjunct professor of physics at the University of Nevada, Reno (since 2005).  Dr. Esarey has published numerous papers on the physics of intense laser interactions with plasmas and electron beams with applications to advanced accelerators and novel radiation sources.  He was elected a Fellow of the American Physical Society in 1996, ``In recognition of his seminal scientific contributions to the physics of intense laser-plasma interaction.''