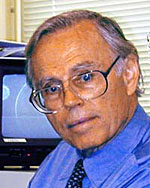 
"For contributions to the science of thin-film nucleation and growth, and for the invention of Low Energy Electron Microscope."


Ernst G. Bauer received his MS (1953) and PhD (1955), both in physics, from Munich University, Germany. In 1958 he moved to the Michelson Laboratory in China Lake, California, where he became Head of the Crystal Physics Branch and U.S. citizen. In 1969 he accepted the position of Professor and Director of the Physics Institute at the Technical University Clausthal in Germany. In 1991 he was appointed Distinguished Research Professor at the Arizona State University.