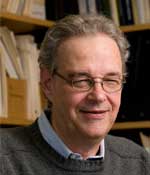 
Estia Eichten received his B.S. in Physics in 1968 and his Ph.D. in Physics in 1972 from the Massachusetts Institute of Technology.  Eichten joined the Theory Group at Fermi National Accelerator Laboratory in 1981 and has held their highest scientific ranking (Scientist III) since 1989. He was an Alfred P. Sloan Foundation Research Fellow and is a Fellow of the American Physical Society and the American Association for the Advancement of Science.   Eichten's research has been devoted to the study of strong dynamics and electroweak symmetry breaking.  In QCD, he has contributed to the study of heavy quark-antiquark systems (quarkonium) and heavy quark effective theory in the continuum and on the lattice.  Eichten and Kenneth Lane have studied the possibility that electroweak symmetry breaking arises from dynamical symmetry breaking associated with a new strong interaction.  They explored the theoretical and phenomenological consequences of this beyond-standard-model physics.  They showed that an extended Technicolor is necessary to give fermion masses in such theories.  Eichten has also made significant contributions to the theory and signatures of quark/lepton substructure.  These ideas will be tested at the Large Hadron Collider at CERN.  Eichten has recently been exploring the physics potential of a multi-TeV muon collider.