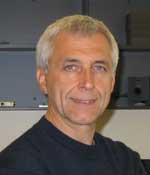 
"For advances in microwave interferometry, ultra-low phase noise microwave oscillators and high resolution noise measurement and for elucidation of noise mechanisms affecting the fidelity of optical to microwave frequency transfer."


Eugene N. Ivanov was born in 1956 in Moscow. He graduated from Moscow Power Engineering Institute in 1979 and received a PhD in Radiophysics from the same institution in 1987.

In 1991, he joined Physics Department at the University of Western Australia where he constructed microwave readout system for the cryogenic gravitational wave detector Niobe and discovered a new type of parametric interaction between mechanical and electromagnetic resonators. Since 1994, he has been working on applications of interferometric signal processing to generation of spectrally pure microwave signals and precision noise measurements. This research resulted in more than two orders of magnitude improvement in the phase noise of microwave oscillators relative to the previous state-of-the-art. It also enabled the development of real time noise measurement systems with sensitivity exceeding the standard thermal noise limit.

In 1999-2008, Eugene worked as a Visiting Scientist at the National Institute of Standards and Technology (Boulder, Colorado). He identified and studied a number of noise mechanisms affecting fidelity of frequency transfer from the optical to the microwave domain.