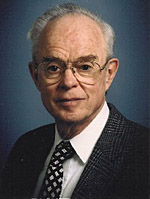 
"For seminal contributions in plasma astrophysics, including predicting the solar wind, explaining the solar dynamo, formulat-ing the theory of magnetic reconnection, and the instability which predicts the escape of the magnetic fields from the galaxy."

Parker has received various scientific awards over the years, beginning with the Space Science Award from the American Institute of Aeronautics and Astronautics 1964, and including among others the Henrijk Arctowski Medal of the National Academy of Science1967, the Hale Award, American Astronomical Society, 1978, the United States National Medal of Science 1989, the William Bowie Medal, American Geophysical Union 1990, the Gold Medal, Royal Astronomical Society 1992 and the Bruce Medal, Astronomical Society of the Pacific, 1997. It has been announced that Parker is the recipient of the 2003 Kyoto Prize in Basic Science.