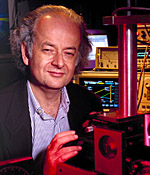 
"For seminal contributions to the invention and demonstration of the quantum cascade laser and the elucidation of its physics, which bridges quantum electronics, solid-state physics, and materials science."


Capasso is the Robert L. Wallace Professor of Applied Physics at Harvard University, which he joined in 2003 after 26 years at Bell Labs ,where he rose from postdoc to Vice President of Physical Research. He holds a PhD degree from the University of Rome, Italy. His research on bandstructure engineering of artificial materials and novel devices has opened up new directions in photonics, electronics, mesoscopic physics and nanotechnology. His current research interests include Quantum Cascade Lasers, spintronics and the investigation of Casimir forces using nanomechanics.

He is a member of the National Academy of Sciences, the National Academy of Engineering, the American Academy of Arts and Sciences and a Fellow of OSA, APS, IEEE, SPIE and AAAS. His awards include the IEEE Edison Medal, the Wetherill Medal of the Franklin Institute, the Wood prize of OSA, the Rank Prize in Optoelectronics (UK), the IEEE David Sarnoff Award in Electronics, the IEEE LEOS W. Streifer Award, the Duddell Medal of the Institute of Physics (UK), the Materials Research Society Medal, the Willis Lamb Medal for Laser Science and Quantum Optics, the "Vinci of Excellence" Prize (France), the Welker Memorial Medal (Germany), the New York Academy of Sciences Award, the Newcomb Cleveland Prize of AAAS.