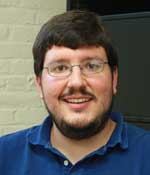 
"For demonstrating limitations in the gyrokinetic theory of the radial electric field for plasmas in an axisymmetric magnetic field and formulating an alternative procedure-insights that have inspired research around the world."


Dr. Parra studied Aeronautical Engineering in the Escuela Tecnica Superior de Ingenieros Aeronauticos (ETSIA) of the Universidad Politecnica de Madrid (UPM) from 1999 to 2004. While still an undergraduate, he got interested in plasma physics because plasmas can be used to impulse spacecraft more efficiently using what is known as electric propulsion. He continued his studies in plasma physics in the Massachusetts Institute of Technology (MIT), where his interests shifted from electric propulsion to nuclear fusion by magnetic confinement. In 2009, he graduated from MIT with a PhD. His thesis focused on self-consistently calculating the radial electric field in tokamaks, particularly in the presence of turbulence.  After graduation, he worked at MIT briefly as a postdoctoral associate before moving to University of Oxford, where he became a Junior Research Fellow at Christ Church college. At University of Oxford, he continued his research on tokamaks, working on scaling laws for Ion Temperature Gradient (ITG) turbulence, studying transport bifurcations due to momentum injection, and developing a model for spontaneous rotation. He has recently moved back to MIT, where he is now an Assistant Professor in the Nuclear Science and Engineering Department. He is a member of the American Physical Society.