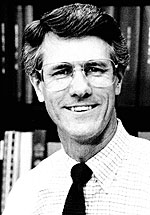 
"For the application of novel and powerful spectroscopic and dynamics techniques to elegantly demonstrate the feasibility of bond-selective photodissociation of molecules, holding the promise of control of chemical reactions by light."


Prof. Crim received his Bachelors degree from Southwestern University in 1969 and his Ph.D. degree in physical chemistry from Cornell University in 1974. He then immediately joined Western Electric Company at its Engineering Research Center. In 1976 he moved to Los Alamos National Laboratory as a Director's Post-Doctoral Staff Member, and in 1977 he joined the Department of Chemistry at the University of Wisconsin-Madison, where he is currently the John E. Willard Professor of Chemistry

Prof. Crim's research in chemical dynamics uses lasers to study the fundamental details of chemical reactions by creating highly energized molecules and following them spectroscopically. Using this approach, he and his coworkers have demonstrated vibrational state control of the pathways in photodissociation and bimolecular reaction.