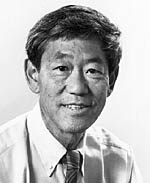 
"For his rare combination of physical insight, theoretical ability and skill for performing careful, clear and definitive experiments. He has made fundamental contributions to plasma physics in such diverse areas as magnetic confinement devices, laser plasma interactions, novel plasma based accelerators and sources for plasma processing. Of particular note are his pioneering works on: electrostatic probes, low frequency fluctuations in magnetized plasma, parametric instabilities in laser plasma interactions, and helicon plasma sources. In addition, his classic text book Introduction to Plasma Physics and Controlled Fusion has helped educate a generation of plasma physicists."


Francis Chen received is B.A. in astronomy in 1950 from Harvard University. In 1954 he earned his Ph.D. from Harvard in high-energy physics, becoming the first student to do an experiment in 1 GeV. He then joined Princeton's Project Matterhorn (now Plasma Physics Laboratory), leaving 15 years later to become Professor of Electrical Engineering at UCLA. At Princeton, he worked on stellarators, reflex arcs, Q-machines, Langmuir probes, resistive drift waves, shear and minimum-B stabilization, and anomalous diffusion. In 25 years at UCLA, he has started programs in far-infrared laser diagnostics, laser-plasma interactions, and low-temperature plasma applications. These initiatives have led to FIR diagnostics for tokamaks and key experiments on beat-wave accelerations. Since 1989, he has given his attention to industrial applications of plasma physics, concentrating on the development of helicon discharges for semiconductor processing. Prof. Chen has taught a generation of students on plasma fundamentals, wave and instabilities, and magnetic and inertial fusion; his well-known textbook, Introduction to Plasma Physics and Controlled Fusion, is popularly used throughout the world. Prof. Chen is a fellow of the APS and IEEE, was Chairman of the APS Division of Plasma Physics in 1983, and received the IEEE Plasma Science and Applications Award in 1994.