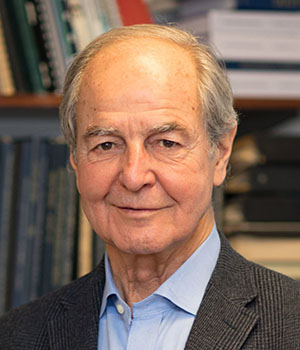 
Frank Calaprice earned his Ph.D. from UC Berkeley in 1967 under Eugene Commins and joined the Princeton faculty in 1970 as part of the nuclear group led by Rubby Sherr and Gerry Garvey. His early works focused on the study of T-invariance in decays of polarized noble gas atoms, including 19Ne, leading to results that represented the most sensitive test for T-invariance in nuclear beta decay for more than 20 years. Frank Calaprice rose to serve as the Director of the Princeton Cyclotron. He led a search for second class weak interactions, and a search for the axion particle proposed by Wilczek and Weinberg as a solution to the CP problem. With then Princeton colleagues Will Happer, Gordon Cates, and Art McDonald, Frank applied optical pumping methods to polarize rare gas atoms to search for parity violation in nuclear forces, and to search for T-violating electric dipole moments of rare gas atoms. Starting in the 1990’s, with University of Milan colleague Gianpaolo Bellini, Frank led the Borexino solar neutrino at Laboratori Nazionali del Gran Sasso, obtaining the lowest background ever achieved in the sub-MeV energy region. Borexino reported the first complete observation of neutrinos from the pp cycle, including the first-time observation of 7 Be and pep neutrinos, and the first time observation of CNO neutrinos, thus confirming the solar fusion mechanism elucidated by Hans Bethe in 1939. Frank Calaprice was responsible for countless crucial contributions to Borexino, including the design and construction of the scintillator containment system, and the design, construction, and operation of the scintillator purification system.