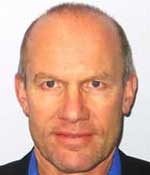 
"For the invention of highly improved sensor technology for atomic force microscopy and the demonstration of the novel capabilities that this enabled."


Franz J. Giessibl received his diploma in 1988 at the Technical University Munich (TUM) in Germany after studies at ETH Zurich and TUM, with a thesis on Raman Scattering on Si/Ge superlattices guided by Gerhard Abstreiter. He received his PhD in 1992 with Gerd Binnig at the IBM Group at Munich University on low temperature atomic force microscopy (AFM). In 1992, he designed an AFM that resolved the Si 7x7 surface for the first time at Park Scientific Instruments in Sunnyvale (CA). From 1995, he was a senior associate with McKinsey & Company, performing benchmarking studies in the technology sector. At the same time, he invented a force sensor (“qPlus”) in his home laboratory, utilizing tuning forks from quartz watches. Since 1997, he pushed spatial resolution of qPlus based AFM as well as combined scanning tunnelling- and AFM and higher harmonic AFM in Jochen Mannharts group in Augsburg. Since 2006, he holds a chair at the University of Regensburg, improving AFM in the fields of subatomic- and spin resolution, low-temperature- and ambient environments. He received the R&D 100 award (1994), the German Nanoscience Prize (2000), the Rudolf-Kaiser-Prize (2001) and the Karl-Heinz-Beckurts-Prize (2009) and is a member of DPG, APS, AVS and MRS.