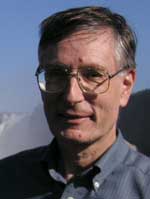 
"For pioneering investigations of the electronic structure of surfaces, interfaces, adsorbates, and nanostructures."


Franz Himpsel received a Diplom at the University of Munich with a thesis in quantum electrodynamics under Fritz Bopp. After a summer at CERN he went to Munich for a PhD in condensed matter physics with Wulf Steinmann. As postdoc he joined Dean Eastman at IBM Research in Yorktown Heights in 1977 to work on surface spectroscopy with synchrotron radiation. He became staff member and was senior manager of the Surface Physics Department. In 1995 joined the UW-Madison as physics professor.

In his scientific work, he used spectroscopy with synchrotron radiation to reveal the often surprising electronic states at semiconductor surfaces and interfaces. His current interests are self-assembled nanostructures at surfaces, such as magnetic quantum wells, atomic chains for the study of low-dimensional electrons, an atomic scale memory for testing the limits of data storage, and the attachment of bio-molecules to surfaces. His more than 400 publications place him among the 100 most-cited physicists.