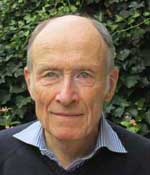 
"For far-sighted contributions furthering our understanding of the very meaning of order and disorder, including formulation of Ising lattice gauge theory, work on the localization transition and the renormalization group."


Dr. Franz Wegner received his diploma degree in 1964, his doctoral degree in
1968 at the Technical University in Munich, and his habilitation in 1972 at
the University in Cologne. He held postdoctoral positions at the Max-Planck-
Institute for Physics and Astrophysics, Munich, at the Institute Max von Laue -
Paul Langevin in Garching nearMunich, at the Institute for Solid State Research
at the Research Center J¨ulich, and at the Physics Department at the Brown
University, Providence R.I. Since 1974 he is full professor for Theoretical Physics
at the Ruprecht-Karls-University in Heidelberg. Since 2006 he is Emeritus.

FranzWegner’s main accomplishments are in critical phenomena. Important
contributions to the Kadanoff - Wilson renormalization picture are cross-over
between systems of different symmetry, corrections to scaling laws, and the
investigation of the tricritical behavior in three dimensions. Duality led him to a
gauge invariant Ising model, which in different phases yields area and perimeter
laws, as in the later developed models describing quantum chromodynamics.

He was one who introduced the non-linear sigma model for the the mobility
edge in Anderson localization, determined exponents in 2+ǫ dimensions, found
multifractality of the wavefunction at the mobility edge and the scaling law
between the exponents of conductivity and localization length. He gave an
upper bound for the averaged density of states of certain random Hamiltonians,
useful for exact estimates.